Bashira, one of our beautiful mares who suffers from a neurological disorder, stopped eating and pooping last week. With these alarming signs, Monika started her regime of treatments to get her to eat and poop, but none worked. So she called the vet to come out an take a look at her. Dr. Bender came out and treated her like she had a colic, but she didn’t really look like she had a colic. We know the signs well, she was not in pain and not lying down?

We got up and checked on her every couple hours all night long and no change, although she started to look like she was in pain. So we began administering pain meds.

By 10:00 am you could see her belly started to literally grow before your eyes, she was trying to poop, but couldn’t. The pain was increasing every minute. Monika made an emergency run to purchase enemas and suppositories…anything to help. Nothing did.

We called the vet back out but he was 2 hours+ away and he told us with her symptoms that this was not likely to be a good outcome, that Bashira would probably not make it.

Well, that is all Monika had to hear! She put on the long plastic glove and started a rectal exam. She had NEVER done this before. With her arm nearly all the way in, she could feel something hard and round, and knew is was a stone…it was huge and she couldn’t get her fingers around it, it kept slipping. Bashira was NOT happy by this point and started to move around quite a bit, we tried to hold her but it was tough. One of the movements Monika’s arm got injured pretty good, nearly dislocated her elbow. We literally yanked her elbow back into place, gave her ibuprofen, and she went back in for more…SHE IS AMAZING AND NEVER GIVES UP ON AN ANIMAL AT VILLA CHARDONNAY!

Well with another try, you can see by the photos what she pulled out…this calcium stone is larger than a baseball and weights about 2 pounds, kind of like a small bocce ball! We couldn’t believe it!

We still watched Bashira closely, within an hour or two she started to go normally and went back to eating…LITERALLY MONIKA SINGLED HANDEDLY SAVED HER LIFE! She is their voice and always will be! Thank you Monika Kerber! 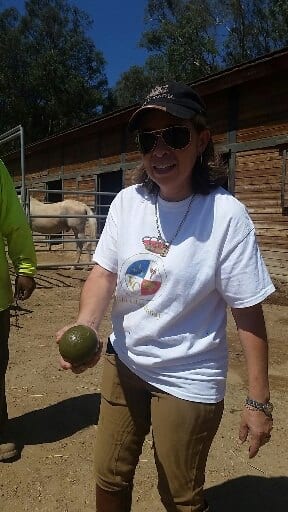 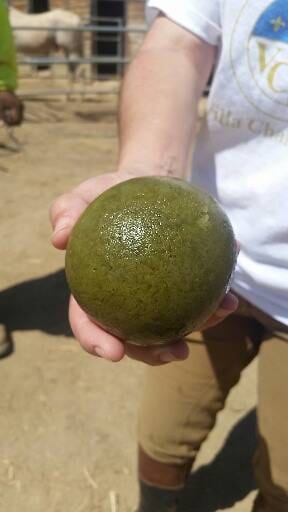