Chardonnay was our first rescue in California. She is a beautiful 12-year-old palomino, the color of a lovely glass of Chardonnay. She has become our inspiration and our pride and joy. Here is a little of her story.
Chardonnay had a fracture in her rear left foot. We found her on the Internet and her owners, a Palomino Ranch in Northern California, told us she was going to a slaughterhouse in the next few days if no one came to take her. For them, a horse with a fractured foot was useless and of no value. Of course we jumped in the car in the middle of the night and drove 5 hours to get her. She was for sale for $400, less than they would get for her at a slaughterhouse. So she is what started our inspiration!
When we first saw her on the Internet, we knew we had so save her and we fell in love with her. We couldn’t figure out how they could put her down. Overall she was healthy and could get around on her bad foot, with no severe problems. At first they told us she just had a bad hoof. We could see when looking at her that her foot was very swollen, but she moved well on it. It didn’t seem to hamper her. We put her in our rented trailer and brought her to a boarding stable near our house.

We soon had a vet come and see her. They did a 360-degree x-ray of her foot and told us it was actually fractured and that she could never be ridden. They suggested a $10,000 surgery that “would probably” help her, although she would still have limited mobility. We thought about it for a long time, as it was a lot of money that we naturally did not have. Riding her was never a high priority for us—just her well-being and not being in any pain were our first priorities. We talked to a lot of experts and got several veterinary opinions.

Finally we got some advice that made the most sense. She was only two years old and she still growing—give her as much glucosamine as possible and check her every six months. That is what we did and she got better all the time. We also believe in miracles, Horses with Wings if you will, and after a year or so we trained her. She is now fully broke and can be ridden—no matter what the experts said.

Chardonnay and several more babies are our inspiration and our reason for starting this organization. Much of this organization has been supported with our own personal funds for the past 10 years.
“A dog looks up to a man, a cat looks down on a man, but a patient horse looks a man in the eye and sees him as an equal”.  - Unknown 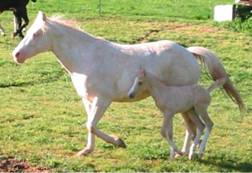 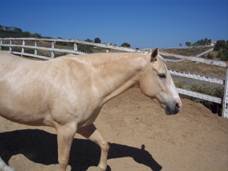